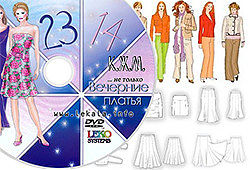 In pieces of Greek art of different kinds (pottery, seals, marble details of temples and sarcophagus) we can see authentic Persians depictions and supposed "stylized Barbarians" images in scenes from Greek myths and the Trojan epos; mythical Amazones in "oriental" costume (see, for example: von Bothmer, 1957; Wesenberg, 1983; Tyrrell, 1984), Barbarian hunting. It has been actual so far whether the most part of such costume depictions of powerful enemies of Greece - Persians - is trustworthy or the presented ones are a rather inexact stylization, a sort of a symbol of Others, of Barbarian motley and alien luxury. There is a real possibility to verify these versions after publishing of complex comparative study of the costume of Pre-Islamic Iranian-speaking peoples by the author (Yatsenko, 2006; see the chapters devoted to Achaemenid Persian costume - pp. 26-47, 111, 284-288, 298-299, 315, 322, 327-328, 331-332,339, 350, 352, 359; figs. 1-21).

Meanwhile, we have a big series of authentic depictions made by Persians themselves or to their order (see, for example: Schmidt, 1948). Besides, Greek and Roman authors preserved a lot of written witnesses of the costume of Achaemenids and their Persian subordinates. Among outstanding Greek depictions of the end of the 4th c. BC, which show the clothes of Persian warriors soon after the Achaemenid Empire fall with ethnographic exactness, two pieces should be mentioned: a prototype of a Roman mosaic from Pompeii with the scene of Alexander the Great and Darius III meeting in the battle by Issus in October 333 BC (Winter, 1909; Mauri, 1957, p. 81; Pfrommer, 1998) and the so-called marble “Alexander’s sarcophagus” from Sidon (Kleemann, 1958; Schefold, 1968; Graeve, 1970; Pfrommer, 1998). Supposedly both monuments go back to the canvas by Philoxenos from Eretria (ca 317 BC). Some details of the sculpture of a dead Persian from the series of four figures from Pergamon (the beg. of the 2nd c. BC) (kept in the Archaeological Museum of Naples) (Maulucci, 1998, p. 33) present a significant interest.

Comparison of these authentic witnesses with Greek depictions of mythological characters in “oriental” costume makes it possible to see authentic features of Persian costume in most cases (it concerns Amazons in a smaller degree, even many Amazons look as authentic men-Persians: see, for example, Bothmer, 1957, pl. LXXVII, 3, 5; LXXX, 1-3; Knauer 1992, figs. 7-8). As I see it, the authenticity may be explained by some very different reasons. 1. Political actuality, military and political power of Achaemenids (for example, the inhabitants of Panticapeon – the far away capital of the Bosporan Kingdom evidently ordered depictions of real Persian kings – Cyrus the Great, Darius I; Abrakom – a contemporary satrap of Syria and others to the Athenian vase-painter Xenophantos) (Tiverios, 1997, S. 270; Skrzhinskaya, 1999, p. 127). 2. A part of Greece and its colonies being under Achaemenids authority. 3. Considering the looks of Persians a symbol of all Barbarian (as a result in illustrations of various Geek myths all Barbarians often look as the real Persians). 4. A great number of captive Persians in Greece (in many situations the slaves used their national costume). 5. Persian clothes being in distinctive fashion throughout Greece, the tendency appeared soon after first war victories of the Greek, thirst for forbidden and censured oriental luxury and comfort (see, for example: Miller, 1997; Neer, 2002; Boardman, 2002; Yatsenko, 2006, p. 286-287).

While Persian masters concentrated on the costume of kings, kings’ wives from the harem, courtiers and priests, on authentic depicting of silhouette and accessories as status signs, Greek artists were more interested in less socially significant personages and made the main accent on cloth décor in upper body garment (a sarapis, more seldom a kandys), trousers-anaxirydes and cloth draping in a tyara headdress. Our judgment on Persian costume depictions authenticity cannot refer to all numerous variations of fabric ornament as they are presented in proper Iranian depictions rather seldom. Authentic Persian textile is not numerous.

The correlation between figure and clothing of Persian personages is seen differently by Greek and Persian artists. Iranian depictions usually show such clothes loose. In Attic vase painting ethnical Persians, even in case of protocol exactness, give the material with a certain part of conventionality and exaggeration due to the dominating style. Therefore, trousers and the upper part of a shirt-sarapis are usually depicted close-fitting the body like modern sport suits (however, trousers-anaxirydes were really very tight: Xen. Cyr. VIII. 3. 13). Greek artists often accentuated a vertical decorative line on a sarapies, which in official art of Achaemenids was not considered necessary to be underlined and sometimes they also emphasized on a decorative line along the collar neck cut (see, for example, Bohmer, 1957, pl. LXXVI, Miller, 1997, No 24). Some single details are often exaggerated. For example, a sharp protruded element of the back part of a tyara headdress in an alabastron from the Hermitage (about 470 BC) (Gorbunova, 1983, photo on p. 186) has extremely prolonged and thick lower juts (Fig. 1).

Depictions of “stylized Barbarians” in garments combining costume elements of two different peoples (the Persians and the Scythians, the Persians and the Greeks) are rather frequent. Such depictions can be seen, for example, in gold facing of sword sheaths of Chertomlyk type from Scythia (Alexeev, Murzin, Rolle, 1991, No 191; photo on pp. 237-245) (Fig. 2). On the one hand, such personages are correctly depicted wearing (like “normal” noble Persians) a kandys fixed at the collar on the back, their hair-style and boots are quite ordinary. But, on the other hand, their tyara with a wide back part and even its strings are purposely richly ornamented (which was not, probably traditional in official Persian art). Personages Ns. 2, 5, 9 with pole-axes or daggers wear some clothes (kandys?) wrapped around their waists (Bittner, 1985, Taf. 40, 2) (which is also not documented in Persian sources). A short kaftan-gaunaka is wrapped too tight (a kaftan was going out of use by Persians and it was never worn tight-wrapped; Yatsenko, 2006. p. 36; such manner is more characteristic of the Scythians, on whose territory the above-mentioned gala swords were discovered and such short-sleeved coats were the most popular type of clothing. Sometimes a Persian personage is presented in Greek high boots, which could not have been possible in reality.

From time to time we deal with some single inexactitudes. For example, there is a very valuable king’s depiction in the so-called “krater of Darius” or “vase of Persians” (the middle or the end of the 4th c. BC; 1,15m high with four tiers of painting) from the National Archaeological Museum in Naples (found in Canosa di Puglia, Apulia) (Mauri,1957, p. 143; Hinz, 1975, fig. 45) (Fig. 3). Here, Darius on the throne among his councilors is listening to a traveler standing in front of him. The authenticity of the king’s Persian costume was earlier denied by A. Gow (Gow, 1928, p. 148). Admittedly, the king’s hair is too long; the complex pattern of plant scrolls of the red tyara has no Persian analogies; but there are such interesting details as triangular elements of the lower front edge of trousers legs and fixing of trousers legs with bracelets a little higher, which has distinctive authentic parallels with Scythian and Chorasmian costume of that time, and, probably, Persian one (see, for example, Graeve, 1970, Taf. 32; Yatsenko, 2006, figs. 27, 46; 32a; 135, 19).

A young Persian warrior from the west pediment of Aphaia Temple in Aegina island (about 490-480 BC) in the scene from the Second Trojan War (München Glyptotek, room VII, fig. XI) wears a garment of authentic Persian silhouette; we see an ornamented trimming even on the leather armor worn above a shirt-sarapis. On the whole, the statue reproduces small details of motley fabrics ornament rather exactly (reconstructed by Vinzenz Brinckmann (Waldmann, 2005, S. 86; Cohen, 2006, fig. 5) (Fig. 4). We can see the similar décor not only on the trousers of some Persians from “Alexander sarcophagus”, but on Persian depictions from Persepolis/Parsa. Horizontal many-colored zigzag lines are the basis of this ornament. The headdress-tyara which is fixed with a wide band above the forehead presents a certain interest. Practically, there were no Persian male personages shown from the back, therefore, the above-mentioned sculpture is very valuable due to a vertical line of many-colored décor on the back which has analogies in Scythian costume of that time (Yatsenko, 2006, fig. 27 [36-38]; comp. Graeve, 1970, Taf. 27). Two palmettos in the upper part of the tyara can be considered the only violation of a Greek master.

The image of a fair-haired warrior (according to another version – “a dancing Barbarian”) on a rare (as far as its shape is concerned) sculptural vessel (dated back to the 4th c. BC) which was discovered in 1858 in the Pavlov Barrow near Kertch (Greek Panticapaeon) and is now kept in the Hermitage, St.-Petersburg (Muzes and Masks, 2005, No 142) is traditionally reffered to as a “stylized Barbarian” (Fig. 5). But I cannot see serious grounds for that. The young warrior holding up a weapon (?) in his hands wears a kandys fastened at the collar on the back, shoes, tight trousers, a black tiara with a red lining and long bands for fastening from the sides. His shirt-sarapis (with a vertical line of dйcor, known in many Greek depictions of Persians) is lowered a little and tied around his tights (which has already been mentioned in connection with the sheath of a sword-akinak from Chertomlyk), which, probably, was the manner to wear it typical for Persians. The unfrequented green color of the shirt and the white color of the shoes are also presented in images of Persians in the mosaic from Pompeii; small gold ornaments fixed in the hair being the only non-authentic detail.

But the fact that in Greek art some authentic elements of Persian costume are given with mistakes and a certain degree of stylization are not the main things.

Persian costume in such depictions is rather unvarying and presents only few of a great number of ones known today elements of Persian male costume in Achaemenid time. For example, in Greek art only one type of headdress – a tyara, of nine types defined by me for Persians is constantly depicted and is of a stereotype character! (comp.: Yatsenko, 2006, pp. 38-40; fig. 1, 1-20; 3, 1-3). A shirt-saparis is a dominating type of upper body garments. A gala kandys worn above it is usually behind the back, fastened with a pin (as Persians really wore it like this during the battle and while hunting); the trimming of lapels made of fur or expensive fabrics is not accentuated at that. A sleeveless clock-kas is depicted more often than in Persian art. On the contrary, a wrapped from the right to the left kaftan-gaunaka is practically not pictured by Greeks (see the exception, about 480 BC: Boardman, 2001, fig. 194) whereas leggings, well-known for Persians, are not presented at all. The dйcor of fabrics for trousers-anaxirydes is usually of one type (horizontal zigzag lines), which can not be typical for Persian everyday life.

The fact that Greek vase painters and sculptors did not depict even noble Persians in gala complexes of clothing and accessories (partly borrowed from Media and Elam – a large pelerine-kapyris, a long skirt, a crown with a row of sharp teeth, a “rewarding” diadem, artificial curling of hair, gold accessories – pectorals, torques, necklaces etc.) is very important. The knowledge of Greeks – mercenaries and political emigrants – about Persian gala costume and its depictions on trophies, coins was not reflected in Greek art. It can be mostly explained by the character of plots (usually mythological): different Barbarian rulers and their subordinates mentioned in them had a Persian look. Nevertheless, even in throne scenes we see Persian kings and satraps not in their ceremonial gala costume but in more practical, adjusted to war and hunting garments which were repeatedly described by Greek authors (such costume differs from the analogous one of less noble warriors only due to a more exotic ornamentation).

Greeks could see such costume complex in battles and everyday life of warriors from Persian garrisons. Depicting Persians in such kind of costume became a certain stereotype. Such costume, as it has been mentioned above, is presented quite authentically, but unvarying and unaccomplished; nevertheless, later Roman depictions of Parthians, for example (Ingholt, 1969; Schneider, 1998; Rose, 2005), present their looks even less informative and more standard.